The light output of an LED module naturally decreases during its lifetime, meaning that the maximum possible brightness of an LED is higher when new than after 10k or 100k hours of operation. The efficacy of the LED itself will also lower over time, because although the input current remains the same, the lumen output of the LED module will have deteriorated with time, resulting in less light for the same power.

CLO (Constant Lumen Output) overcomes this limitation by running the luminaire at a lower current initially and then increasing the current output in line with the decrease in lumen output. This not only ensures stable lighting but also saves energy and increases the lifetime of the LEDs.

To achieve a constant light output of the module, the LED driver stores the operating hours of the LED module, powers the LED below its maximum rated lumen output, then over time increases the output current in response to the natural reduction in lumen output over the lifetime of the fitting.

The benefits of CLO include:

Night dimming of luminaires is a simple and practical way of saving energy and increasing the lifetime of a lighting installation, without the need for
a sophisticated control system or compromising the safety and security that outdoor illumination provides by switching it off completely.

The automated dimming takes place via an integrated timer (no real-time clock). There are maximum five independent dimming levels that can operate on
a cycle (Operation time) which can be adjusted according to the seasons. Once they have been calibrated there is no further intervention required by the client or manufacturer. 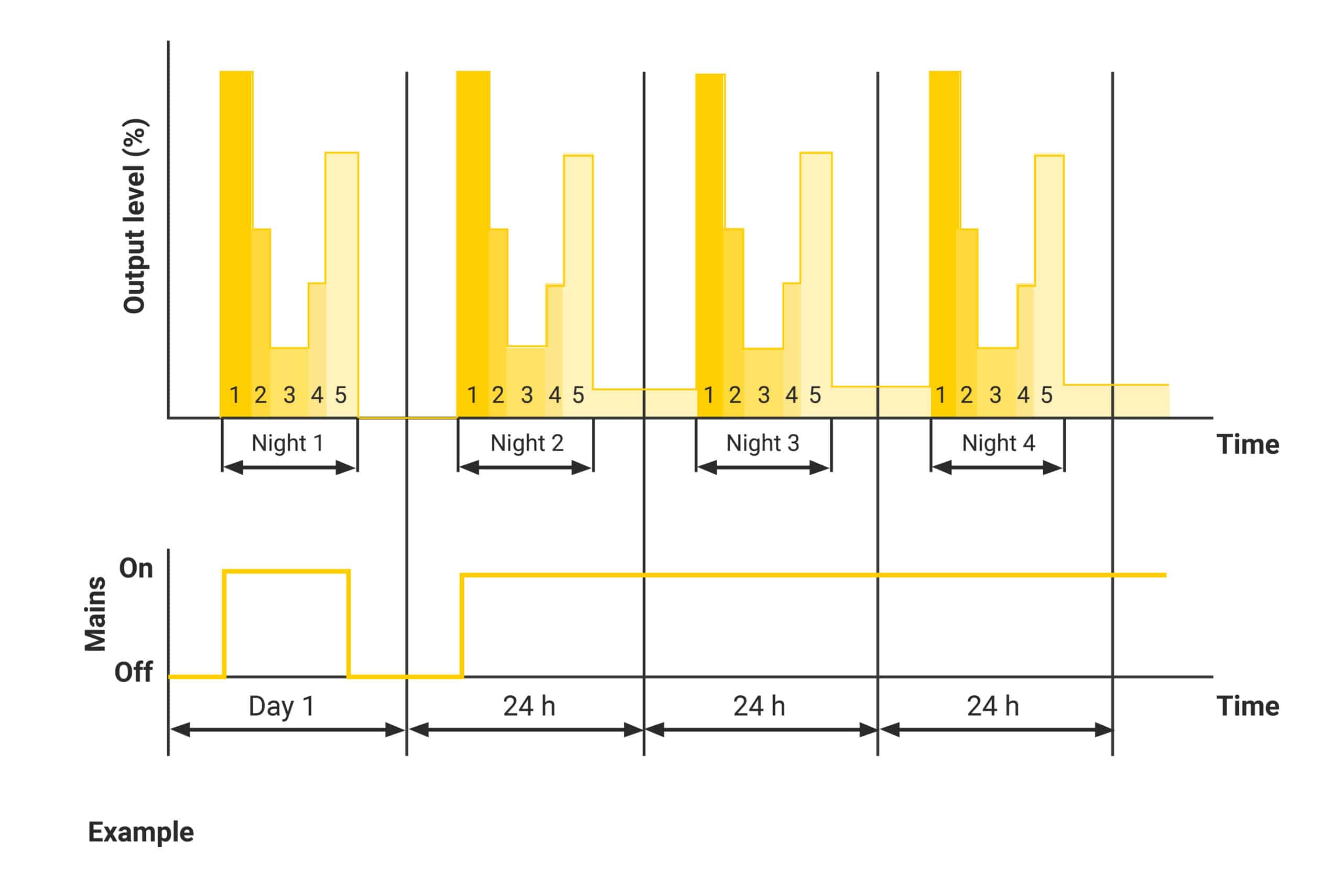 Example: Client needs to turn on and off for 1 Day (If possible 3 consecutive days) to set the operation time and Midpoint. And the dimming scene which was set at the factory will take place automatically the next day with this calibration.
*The limitation is 5 independent dimming levels.

There are a number of Night dimming options available, including standard offerings and custom solutions on project specific basis.

This option enables a lighting system controlled via DALI to benefit from the energy savings and lifetime extension provided by CLO.
As this option does not include automatic Night dimming, any dimming will need to be handled by the DALI controller system.

► Set from factory by choosing a standard option (DA1 / DA2 / DA3).
► Set from factory upon a custom request by the customer.
► Limitation here is to have 5 independent dimming levels.
► User can re-setting at site by using an “Interface” which can connect to the “Driver”.
► LIGMAN do NOT sell this interface. Clients can buy them. LIGMAN will provide which driver is used on the spesific model.

BILLUND street and area lighting luminaires from LIGMAN are a robust and reliable family of fixtures that provide both high-performance and sustainable operation through the latest in lighting innovations.

Existing benefits of BILLUND include the use of LIGMAN MicroVOS technology for specifically tailored optics, glare control certified by the International Dark Sky Association, and Internet of Things (IoT) incorporation through LIGMAN LIGHTCONNECT for future proof approaches to lighting control and optimisation.

The latest advantage that BILLUND now offers is CLO and Night dimming. These unique technologies both reduce the energy consumption and increase
the lifetime of a lighting installation.